In 30 days it will be 17 years since Kalpana & Balaji got married, as reported in AID News of April 8 1999.
Before they could do that, though, they had to apply for a license.  That too was duly noted in AID News:

Notice is posted of the application of Balaji & Kalpana for a marriage licence, which will be granted in 30 days provided no objections are filed with the registrar of marriages in Annanagar, Chetpet or main office in Chennai.

During our recent visit to Chennai, we remembered this and the photo we took with them on that day, which Kalpana says I named “3 fellows and a wife.”  I actually don’t remember that and wonder if this is a name invented by her!  In any case, here we are seventeen years later. 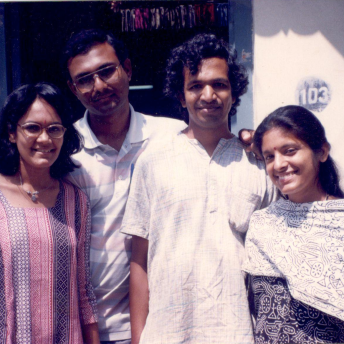 Outside the office of the Registrar of Marriages, Chetpet, Chennai, February 1999. Kalpana says that I called the photo “3 fellows and a wife” but I think she came up with the name.