Jagrutha Mahila Sanghatan, a Dalit women’s collective, formed in 1999-2000. AID has supported the group through projects, fair-trade marketing as well as solidarity to the Sanghatan in various phases. Along with AID-Bangalore volunteers Chetana, Karthik, Disha & Tamia, Ravi, Khiyali and I recently visited the women to hear their own reflections on their experiences and successes over the years, fighting oppression based on caste, gender and class, as well as ongoing challenges on all these fronts. Here are some photos from our visit with these grassroots partners.

Here are the Sanchalakis, or coordinators of the Sanghatana whom we met in February at their office in Pothnal, in Raichur district, Karnataka.

In Bagalavada, one of the village level activists of the Sanghatan, Siddamma talked about the Mahila Mandal and their struggle for wages. Before coming together the women, all from the Dalit Madiga community, would often work for weeks without getting paid on time or in full, if at all. To question would result in boycott, beating or worse. “Thanks to the Sanghatan we have the courage to demand payment. We go to banks, panchayat meetings, etc.”

Bagalavada: Siddhamma talks about the Dalit women’s struggle for wages.

Bagalavada: Siddhamma talks about the Dalit women’s struggle for wages.

Jagrutha Mahila Sanghatan (3/6) Village Bagalavada:
Struggle against Untouchability and for Right to Food.

Women members of the Mahila Mandal reminisce about important phases of their struggle for rights as part of Jagrutha Mahila Sanghatan, a Dalit women’s collective in Potnal, Raichur District. Shantamma discusses the struggle to get anganwadi rations and to fight segregation / exclusion of Dalit children. After having a Dalit women appointed as the cook in the Anganwadi, some of the non-Dalit families refused to send their children, and the organzation challenged that practice of untouchability.

Bagalavada: Women reminisce about struggle to integrate and monitor the anganwadi.

Today the anganwadi is monitored by the women’s group and the cook, who is a Dalit, serves children from both Dalit and non-Dalit families together. 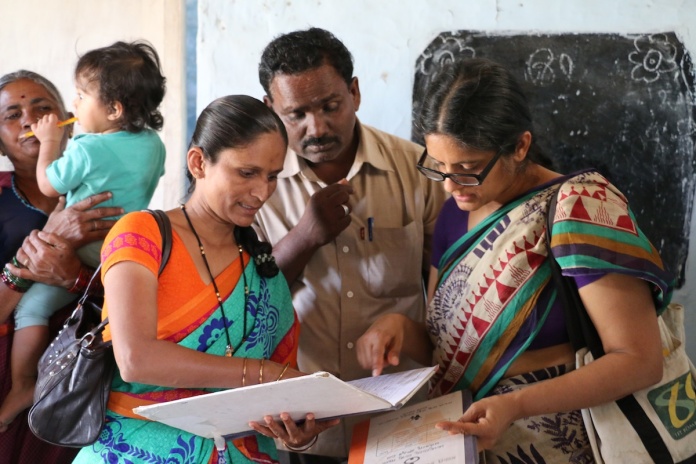 Bagalavada: Jagrutha Mahila Sanghatan activist Susheela shows records of the anganwadi, which, following a campaign by the women, serves children of all caste backgrounds and is monitored by the Mahila Mandal.

AID extends solidarity to the women’s struggle against untouchability and for right to food for all.

Jagrutha Mahila Sanghatan (4/6): Traditional Knowledge.
In Amareshwar Camp, we met the members of the Mahila Mandal and their families, including Ajji, a senior midwife who had delivered almost all the people present in the meeting and their children as well. She spoke about nutrition, local grains such as ragi, bajra and jowar, breastfeeding and the role these played in family health in general as well as women’s health and birth in particular.

Amareshwar Camp: Ajji is a traditional midwife. She attended the births of nearly all the women present at the Mahila Mandal meeting, as well as those of their children.

Traditional knowledge plays an important role in strengthening people’s rights and access to their own local, life-supporting resources and skills.

Members of the Mahila Sangham in Amareshwar Camp raise a slogan of solidarity. Febrary 2016.

Jagrutha Mahila Sanghtan (5/6)
Chiguru Enterprises
To support themselves and the organization, women of Jagrutha Mahila Sanghatan started making terra cotta jewelry and home decor and selling it in local colleges and exhibitions. When villagers are displaced and wars are fought over gold, diamonds and other precious metals and gems, the world needs to appreciate the peaceful beauty of handcrafted terra cotta goods.

Chiguru has been a regular supplier to AID tables and the products are quite popular and help connect conscientious consumers to eco-friendly, fair-trade products.

Pothnal, District Raichur: Sunil and Megha come from families engaged in migrant labour. With the support of Chilipili school, they broke the cycle and also finished college. Now they want to work to end bonded labour and child labour in their communities.

Jagrutha Mahila Sanghtan (6/6)
Dreams for the Next Generation.
Educate, Agitate, Organize!
To prevent child labour, Jagrutha Mahila Sanghatan initiated mobile schools in villages where children were at risk of entering the workforce with their parents and eventually set up the Chilipili Shala for children of migrant laborers, all of whom were Dalit.
Sunil and Megha, whose parents are migrant laborers, attended Chilipili Shala, went on to earn university degrees and are now keen to work with children from their community seeking education and livelihood opportunities.

Alumni of the Chilipili Shala recently met at Chilipili Youth Forum to share ideas and take part in music, theatre and debate. Though recognized as a model school by the National Child Labour Project, the Chilipili Shala was recently forced to close due to ending of government support. The Youth are thinking of ways to revive or reinvent the school in present circumstances.

Would you like to be part of this conversation?